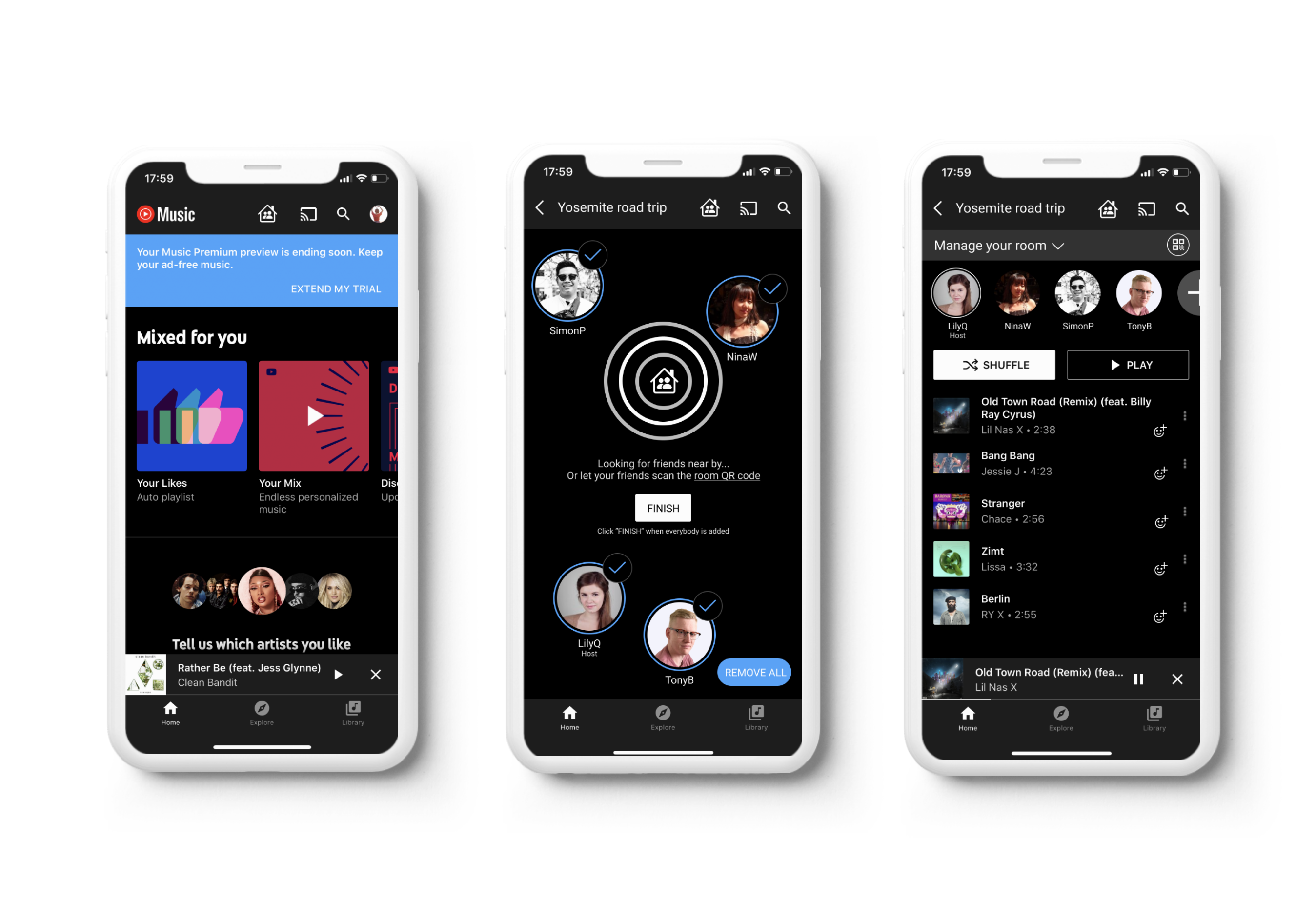 To help a music app define what is the best way to expand on social capabilities, I added a feature called PartyRoom to YouTube Music, a music streaming app developed by YouTube.

PartyRoom is a space for multiple users to share and control music within the app in real-time.

Music taste is a very personal thing, but even people who rarely share music will still play songs for others in the car.

At first, I didn’t have a clear mission or specific goals for social experiences on a music app. So I interviewed 6 people who used music streaming services to do some explorative research on how they shared music. It turned out that:
• People tend to only share music with close friends
• They only share music when they are sure they have a mutual taste.
‍
But there was an exception. I discovered that people usually shared music in car when they were with other people. Music makes the journey shorter, helps to reduce the awkward silence, and creates a happy time when people sing along. 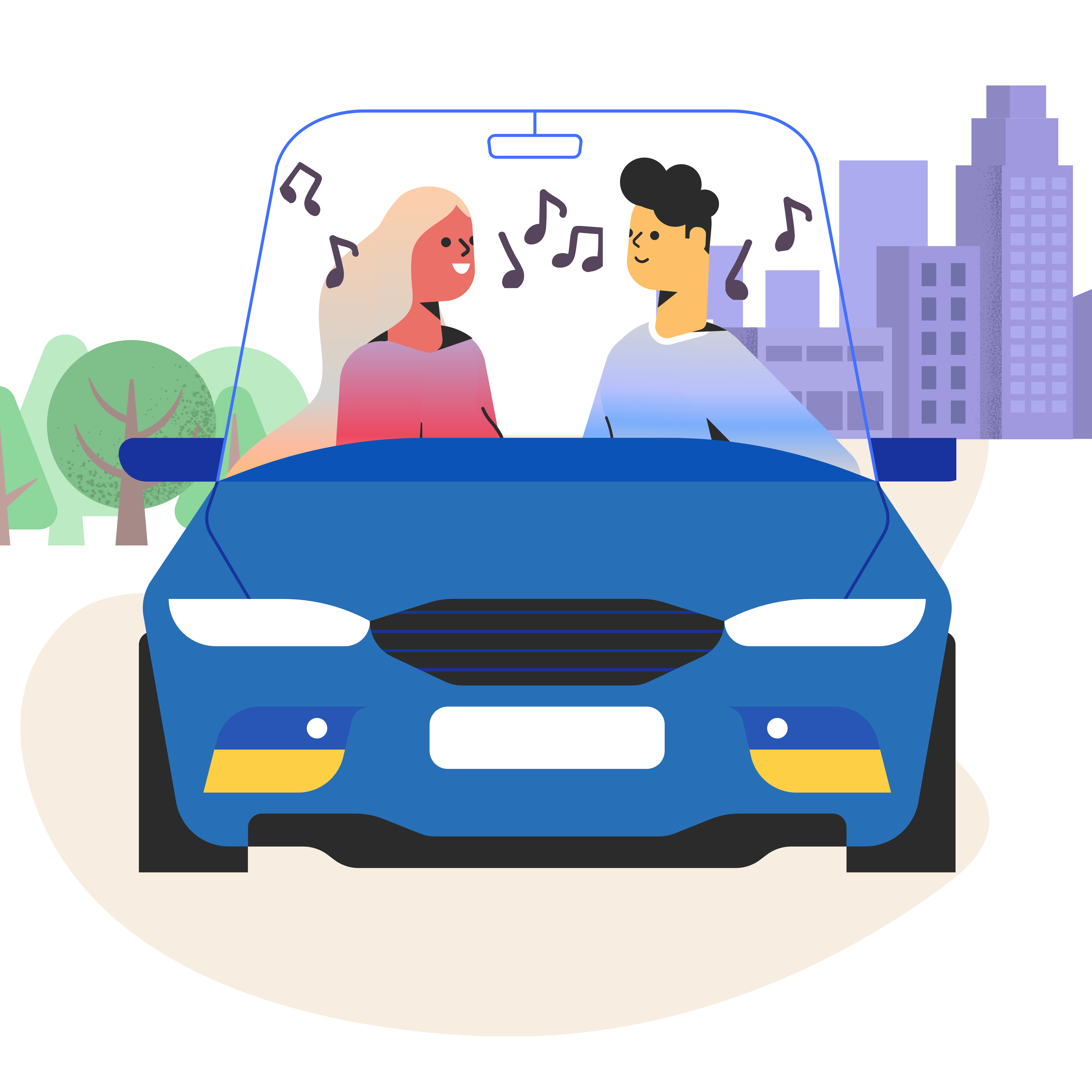 However, sharing music could be inconvenient and unsafe for people in the car, especially drivers.

To dig deeper into in-car music experience to find people’s needs and pain points, I conducted secondary research and another round of interviews with 8 people from the perspective of both driver and passenger. All interviewees used music streaming services in cars when there were other people.
‍
There are plenty of ways to listen to music together depending on the car type. Most of the interviewees used an AUX cable or bluetooth. I found when multiple people wanted to share and control music together, it was not easy to do that: 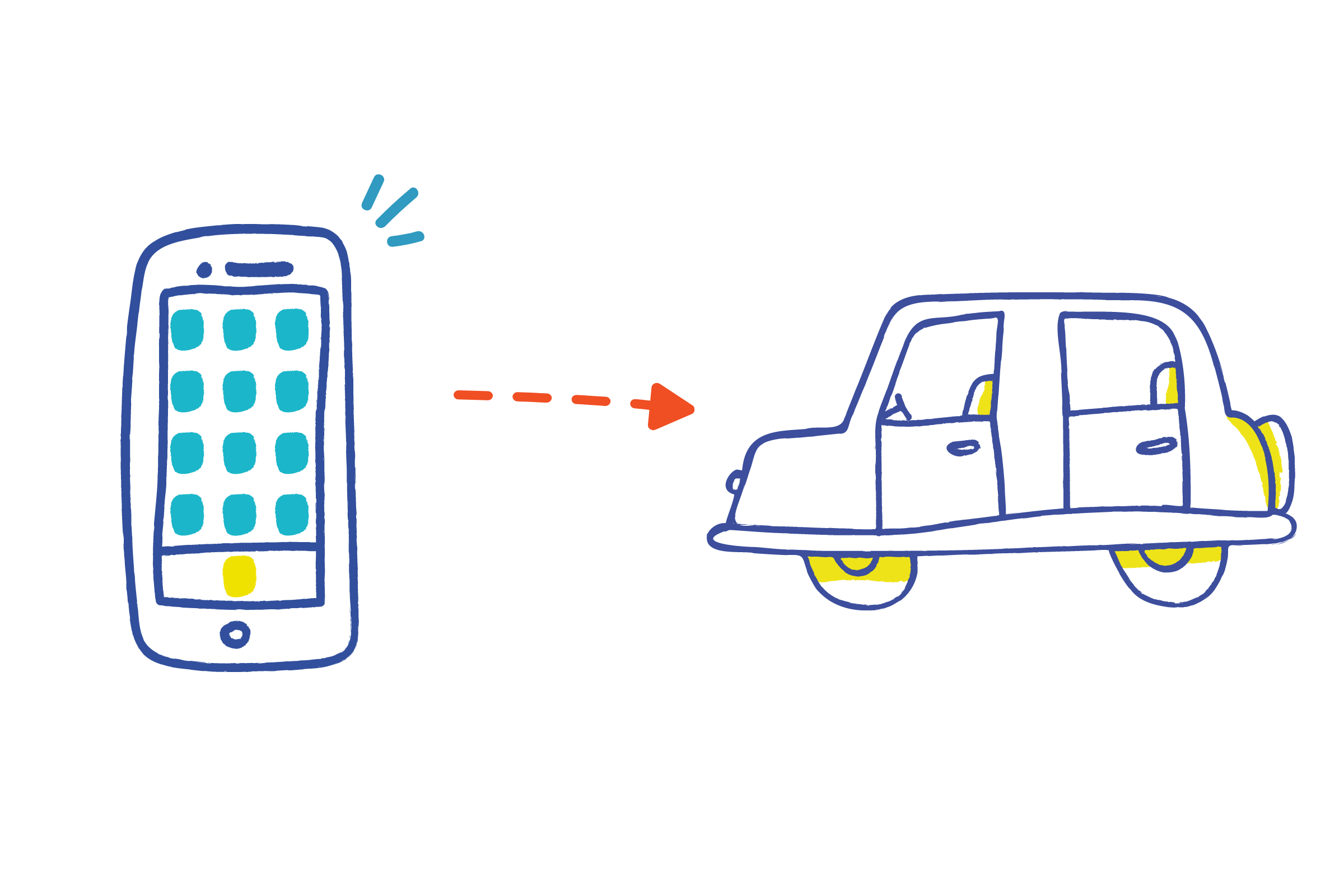 1. Even when people know it’s not safe to play music manually while driving, almost everyone has done that!

Many people believed they were used to control music with their phones while driving. However, one of the users in my interview got in a car accident because of this false sense of security.

2. It’s not easy to swap devices while the car is moving.

For many cars if a new device has never connected by bluetooth, the driver needs to stop the car to make the connection. Most drivers either forget or will not stop the car just to connect.

In this case, usually a passenger will use the driver’s phone to search for music, and the driver has to unlock the phone while driving, then give it to the passenger. It is a lot of work. 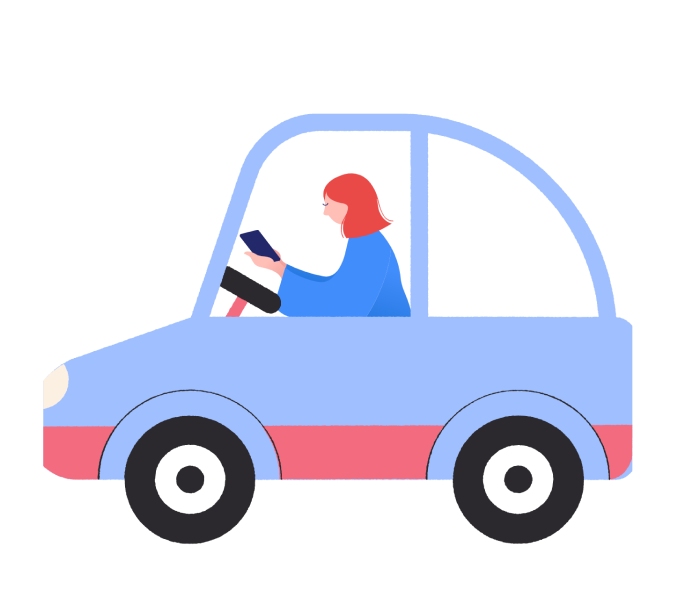 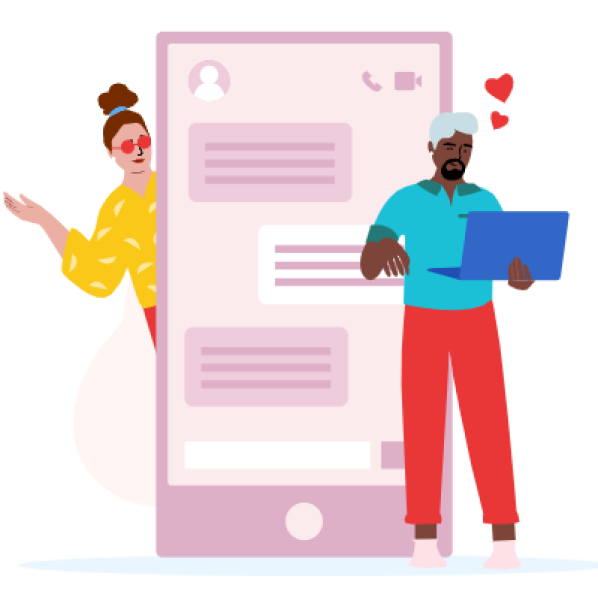 3. The current music sharing features are limited and they didn’t support easy sharing.

Most people shared songs to others by sending links through texts. Other features like collaborative playlist was not commonly used. It was hard to be found in the app and was not used in real-time sharing.

The research findings clearly pictured the needs and pain points of the users. A persona gradually appeared in my mind which helped me relate to a typical music listener and guided me to figure out the problem I was facing. 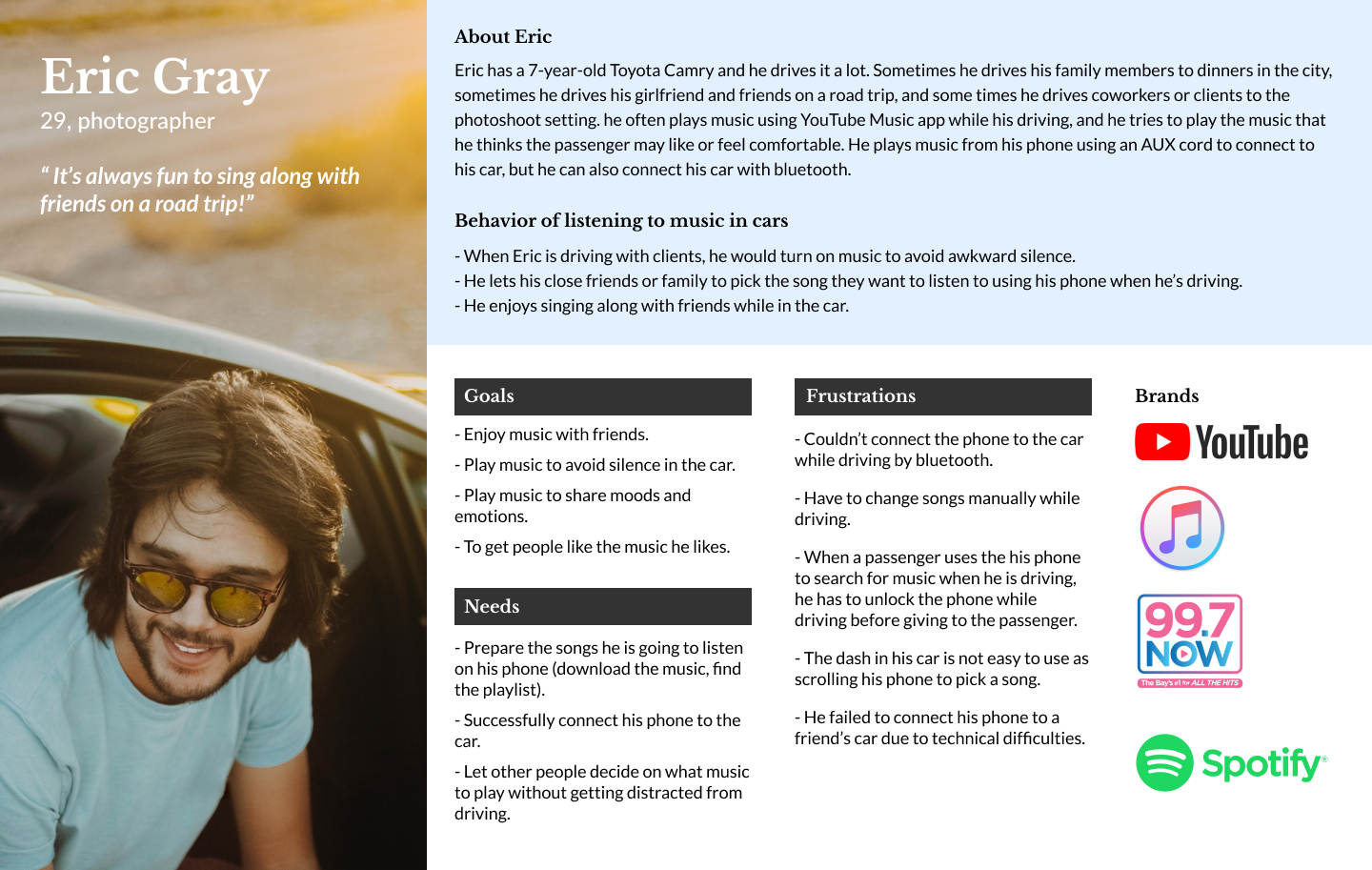 How might we help passengers search, pick, and control the music without interrupting the driver or the journey?

I tried not to satisfy myself with the first idea that popped into my head and brainstormed all the crazy ideas I could think of to solve the problem. Among all possible solutions that involved different perspectives and roles, one idea seemed promising:
‍
Adding a feature called "PartyRoom" to connect users’ accounts together on YouTube Music so that everyone can use their phone to control music while only one phone is connected to the car. Even if the driver’s phone is playing music, passengers can still control the music without operations from the driver.
‍
I created a storyboard to visualize my idea and explored how the feature would actually work on the original app, these sketches became my first thoughts of wireframes. 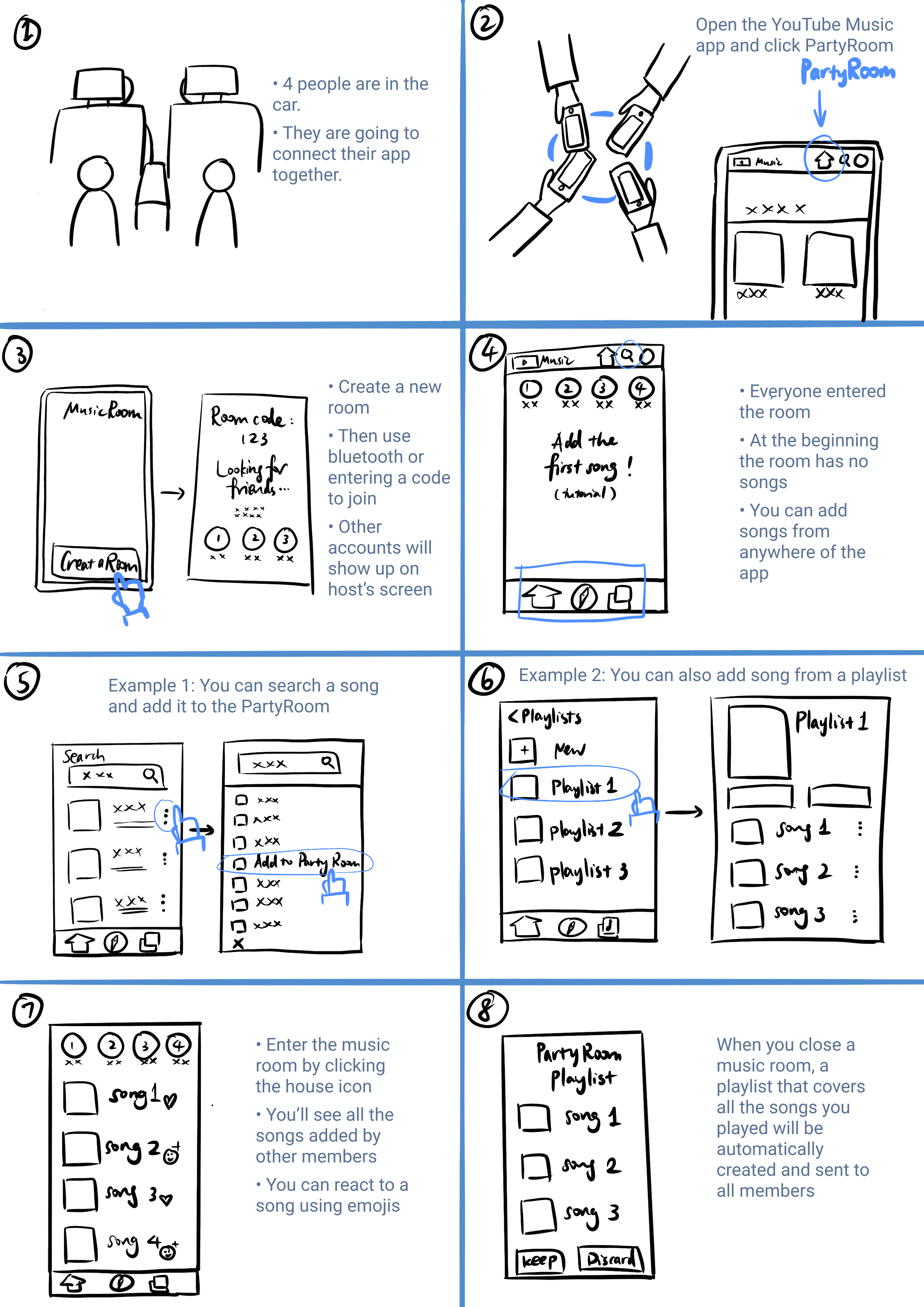 The storyboard guided my user flow and showed the basic interactions between the user and the feature. The flow was finalized after each round of prototyping. 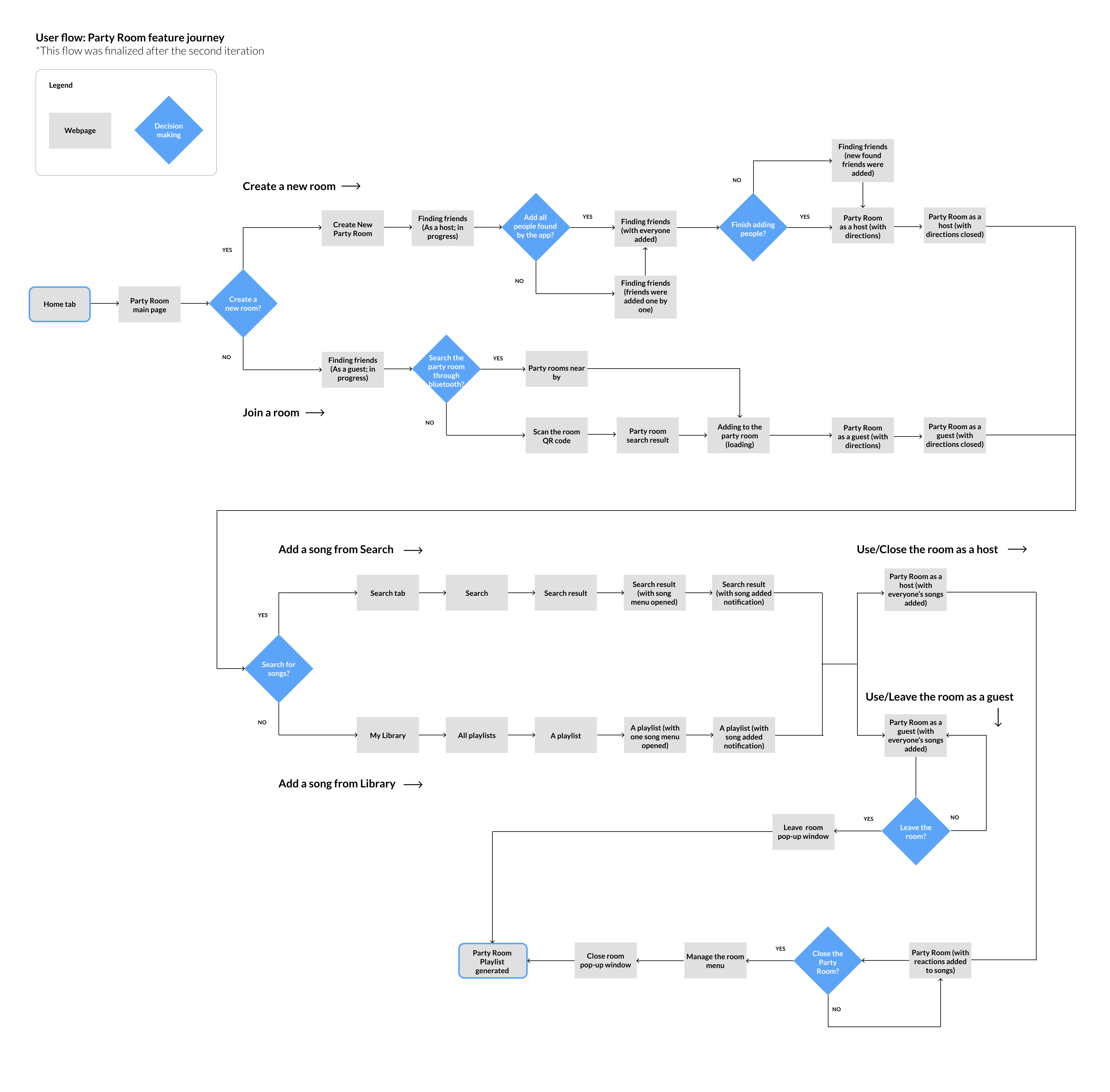 For a great experience

2 rounds of prototyping, testing and iterations

The interaction between a user and the feature starts when everybody gets into the car, for example, to start a road trip to Yosemite with 3 friends. The user flow involves 2 tasks and 2 roles: be a host and create a room, or join a room created by the host. Under this scenario, I built a prototype and had 6 users tested in each role.
‍
Since the feature should integrate seamlessly within the rest of the app, all the screens I created follow the styles and UI components of YouTube Music app. The way users interact with the feature is also the same as how the main features of the Youtube Music app work, like searching and adding songs.
‍
Both myself and the users were excited during testing, but there were still places that people got confused. The users provided good criticism and feedback for me to update the prototype for the next round of testing.
‍
I tested the new prototype with 6 people. All users completed the 2 tasks smoothly and successfully, however I still made minor iterations to eliminate any frictions. Shown below is some of my positive feedback:

I was only thinking about sharing music in cars, but users thought about more situations to apply this feature. The feature might work well with 5 people, but how about a 20-30 people party? Also, many users thought they needed to manually add people into the room instead of eliminating the strangers that are automatically added. What if there are a lot of strangers? Do they need to remove them one by one? These were all very good questions reminding me to think about all kinds of situations. Here is what I changed: 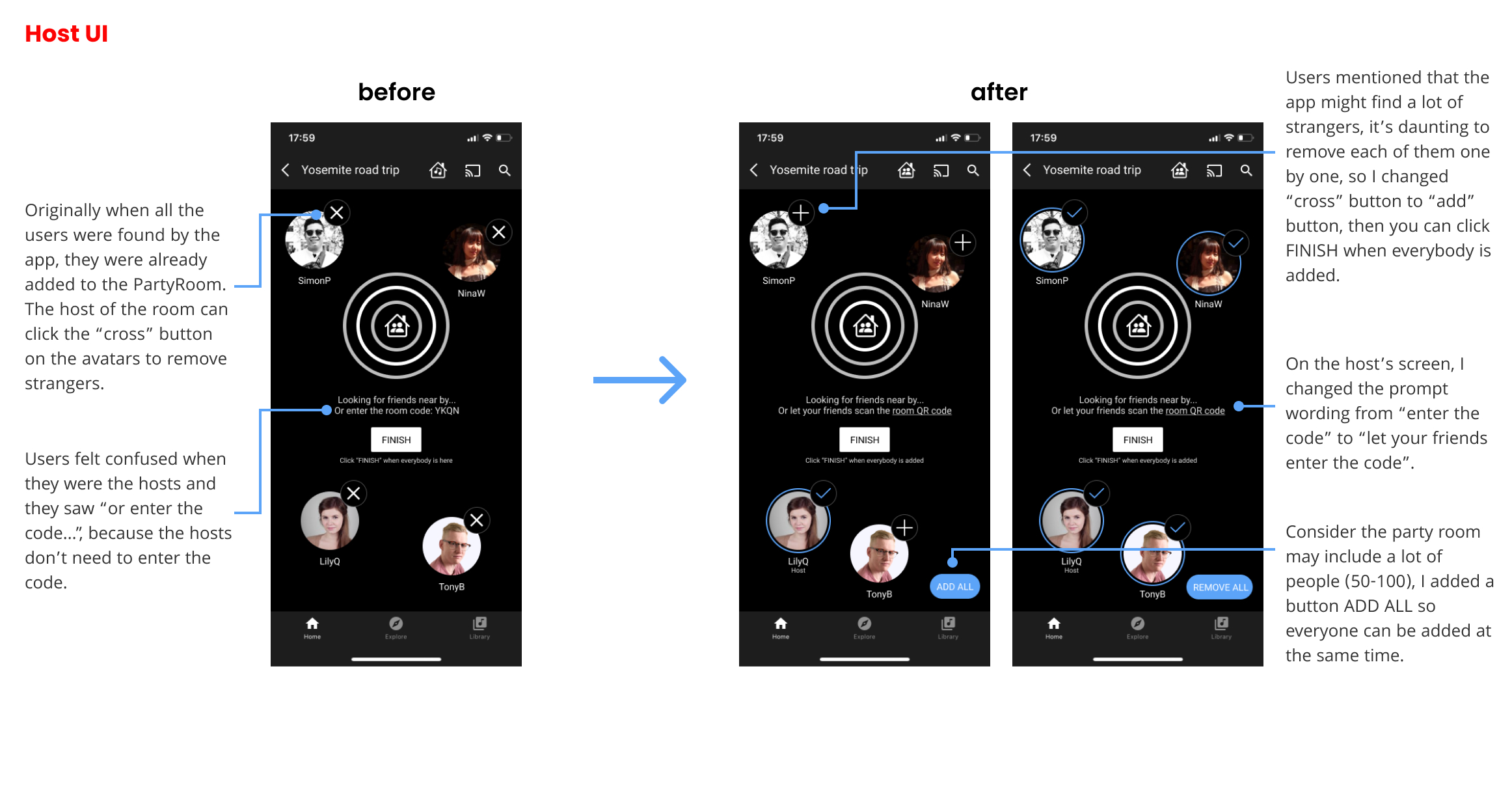 2. A better way for users to join the party room

Using letter codes to enter the party room confused users that they could join a party room whenever and wherever, which is not the case for sharing in real-time when users are next to each other. Thus, I decided to use QR code instead. 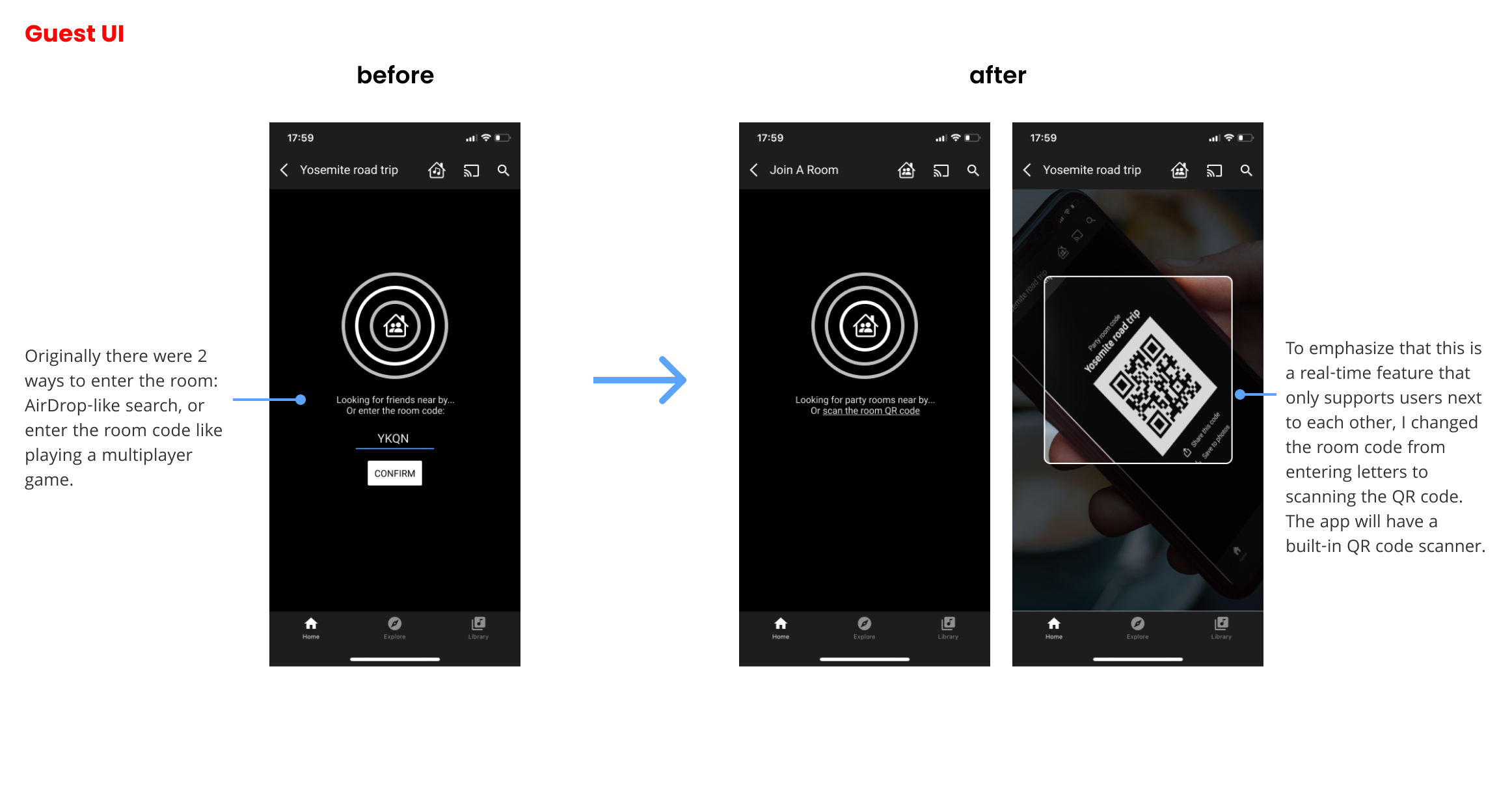 I wasn’t thinking about creating different screens for hosts and guests until users started to question me “Can anyone close the party room?”, “I’d like my profile differentiated from others”, etc. It got me thinking if the guests should have the same rights to manage the room as the host. I decided only the host should be able to close the room and remove people. The guest can choose to leave or add someone else to the room. It is necessary that the host & guests have different interfaces. 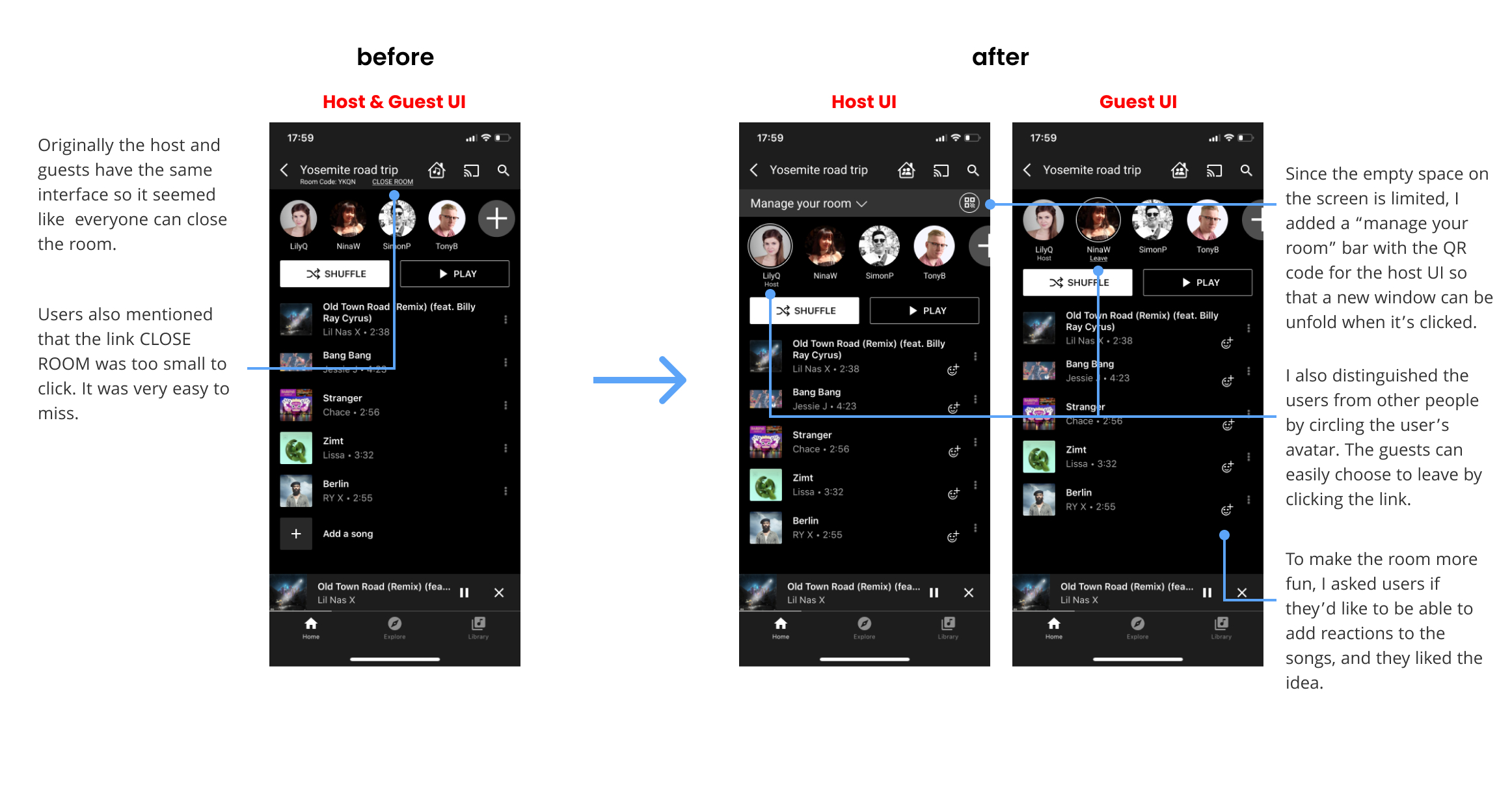 I used a house icon at the top bar of homepage to make the feature prominent and easy to find. On a road trip, only the person whose phone is connected to the car has to create a Party Room and simply wait for other people to join. In this case, if the driver creates the Party room, they only need to leave the rest of the work to the passengers. When everybody is found, the host can choose to add one by one or add all to your room.

There are two ways to join a room: search by bluetooth or scan the QR code. When a new room is created, there will be an exclusive QR code generated. These two ways take minimum steps for users to join a room, no need to use other people’s devices.

Party room members can add songs from their own phone without distracting the driver. You can add a song to the Party Room from anywhere on the app (search, playlists, etc.). At the same time your friends may also add songs so you will probably see plenty of songs when you check on the room. You can also add emojis to each song to express your reactions.

Keep the memory as a playlist

One of my interviewees inspired me with a story about how he and his friend played their old high school mix CD in the car 20 years later and created a new moment. Music is about the mood and memories. Every use of the Party Room is about creating a memory with friends. When the host closes the Party Room, a playlist containing all the songs that have been added will automatically save to each member’s library.

Throughout 2 rounds of usability tests, my enthusiastic users gave me many cool and mutual ideas to add to this feature, but because of the scope and time limit, they will be considered as next steps:
• Consider having a voting button in the Party room
• Users are able to change the sequence of the songs
• Consider showing who added which song
• Make the room recurring

It was fun to talk with many people and learn about how they shared and experienced music in their lives. I realized how important the research was for me, especially when the project was about something I was not familiar with (I don’t drive and I mainly take public transportation). Coming from a position of unfamiliarity, I learned to really listen to people's ideas without letting my own biases get in the way.
‍
Making an animated prototype really makes the feature more self-explained. In the first round of testing, many users did not understand the app's "searching for friends" function and I received many different user perceptions that did not meet my expectations. During the second round of testing I implemented an animation of the "searching for friends" function that successfully helped users understand what the app was doing.

Next case study
Up Next
workaboutresumephotography